Gourmet, traditional cuisine in Maine et Loire.
Our restaurant perpetuates the region's gourmet tradition and offers dishes prepared with flavoursome, locally sourced produce. Discover the restaurant and the chef, Franck Redureau, who certainly knows how to tickle your tastebuds with his tasty, authentic cuisine.
Why not try the restaurant's specials, like the fish dishes prepared with fish from the Loire, in the dining room with a terrace which offers a panoramic view over the Loire.
All of the fresh products, vegetables, meat, poultry and cheese are sourced locally. These local products are carefully selected by our chef who is keen to renew a sustainable relationship with small producers in Maine and Loire.
The restaurant is closed on Sunday evening and Monday.

À la carte, Franck Redureau invites you to a journey between Toscane and French traditionnal gastronomy. Let yourself be transported by this "tomato like a tatin and mozzarella buratta and its basilic vinaigrette"
.

This Signature will undoubtfully seduce you with its sweet yet pepsy honey and agrumes Noix de Saint Jacques...
.

Automn at your table

Discover "la Douceur Angevine" at fall... The chef created this tartelette and figs to ravish your senses.
. 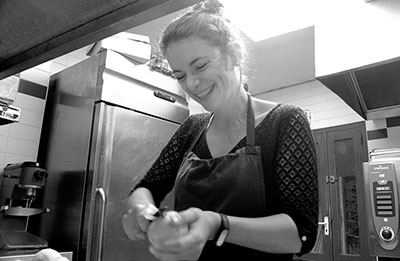 The Hotel la Gabelle, formely named Hotel de la Loire, was created in January 1965 by Michel et Maryvonne Redureau. This small hotel had only a few rooms with minimum comfort. Six years later, Michel and Maryvonne decided to renovate the hotel:
In 1972 they added a floor to the hotel, which housed 18, fully equipped comfortable rooms. The restaurant, the kitchen and the façade were also renovated. For one year, when the main renovation work was carried out, the restaurant was moved to a family room situated in the town. In 1986 further renovation work was carried out in the rooms, reception hall, bar and reception rooms.
In 1987, their son, Franck, came back to work at la Gabelle after a few years spent learning the trade (Le Vert D’Eau in Angers, Fouquet’s in Paris, the Hôtel St Paul in Noirmoutier, le Ravenstein in Bruxelles etc…).
In 1991, Franck married Brigitte who completed the team. In 1992, their daughter, Laura, was born (who is now also learning the trade) and in 1997 Alexandre was born who is actually learning Boulangerie.